Public lands ranching is the most widespread commercial use of public lands in the United States. Ranching is one of the primary causes of native species endangerment in the American West; it is also the most significant cause of non-point source water pollution and desertification.

Public lands ranching significantly contributes to climate change by emissions of the global warming gases nitrous oxide and methane; it causes loss of soil carbon reserves by causing erosion and by substantially reducing the landscape’s potential to sequester carbon. 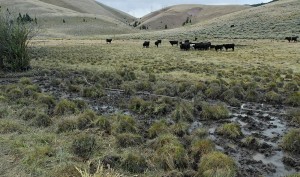 The cost of public lands ranching to American taxpayers is enormous. The current public land grazing fee of $1.35 per month for one cow and her calf is woefully below market value. Direct government expenditures to administer public land grazing constitute an annual net loss to the taxpayers of at least $123 million and more than $500 million when indirect costs are accounted for. As much as 96% of these public dollars are spent to enhance livestock production in direct conflict with legal mandates to restore the health of public lands.

For all of this public expense, public lands ranching fails to demonstrate any significant economic contributions to rural economies. Hobby ranchers and corporate-entities hold the lion’s share of grazing permits on hundreds of millions of acres of public lands. Most of the rest of public land ranchers rely on service jobs in small towns as their primary source of income. Rural communities support public land ranchers not the other way around.

Public land managers are routinely subject to political interference. Bureau of Land Management and Forest Service scientists and other staff work in a professional atmosphere of coercion. Land managers have lost their jobs and avoid scientific inquiry for fear that the results of such inquiry will undermine their careers. BLM and Forest Service staff and conservationists continue to be subjected to psychological and physical intimidation in the field.