Energy and Mining on Public Lands

Besides having harmful direct effects, fossil-fuel energy projects imperil wildlife by exacerbating the climate crisis with CO2 and methane emissions. If humans and wildlife are to survive long term, the world must transition quickly away from coal, oil, and gas. 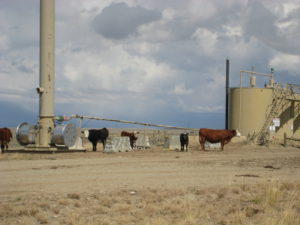 However, the world is not only in a climate crisis, but also in a biodiversity and extinction crisis. In the last 50 years, the world has lost more than two-thirds of its wildlife. The world’s current extinction rate is hundreds or even thousands of times greater than the natural baseline rate. This means that to pass on a livable world to future generations, we must address the climate crisis and the biodiversity and extinction crisis all at the same time.

As the Intergovernmental Panel on Climate Change pointed out in a 2021 report, “technology-based measures that are effective for climate change mitigation can pose serious threats to biodiversity.” On a practical level, this translates to an urgent need for renewable energy project siting that does not exacerbate the biodiversity and extinction crisis.

Open-pit mines cause permanent damage to public lands. They blow up mountains, obliterate wildlife habitat, consume and contaminate groundwater, and often cause acid mine drainage into waterways, killing aquatic wildlife. Some mines require treatment to clean up water contamination for hundreds of years if not forever after mining is completed. Underground mines can also cause harm wildlife on public lands by depleting aquifers, causing acid mine drainage, and bringing human disturbance and noise into remote areas.

Mines do so much damage to public lands and wildlife that there is no such thing as a “green” mine, not even when its products will be used to further the transition away from fossil fuels, such as lithium for electric car batteries. Therefore, it is important that new mining be reduced as much as possible. The U.S. can do that by: