CASPER, Wyo.— Conservation groups today filed a legal petition challenging the Trump administration’s plan to allow 3,500 new gas wells in southwestern Wyoming. The massive frack-field expansion could block the ancient Path of the Pronghorn and prevent access to winter ranges that the animals need to survive.

“This plan would sacrifice Grand Teton’s magnificent pronghorn herd and one of North America’s oldest migration corridors to enrich fossil fuel companies,” said Wendy Park, an attorney at the Center for Biological Diversity. “It’s obscenely cruel and shortsighted, and it’s typical of the devastating damage the Trump administration’s doing to our public lands.”

The plan allows Jonah Energy to develop 350 gas wells annually over 10 years within a 220-square-mile area of sagebrush habitat that pronghorns and sage grouse rely on for their survival. The larger Sublette pronghorn herd, which includes the Grand Teton herd, also uses the project area for migration and winter habitat.

“The Sublette pronghorn herd has already declined by 40% in the last decade,” said Linda Baker, director of the Upper Green River Alliance. “We are losing the pronghorn migration corridors that lead to crucial winter ranges in the Upper Green River Basin. It is time for BLM to responsibly manage these vital habitats for all wildlife reliant on the sagebrush sea.”

The pronghorn migratory path is one of North America’s last remaining long-distance land migrations and one of the longest in the western hemisphere. While the path’s northern reach to Grand Teton National Park is federally protected, its southern section has been narrowed by two neighboring gas fields.

More than a third of the Jonah Energy project is also in key greater sage grouse habitat, which includes breeding grounds. Almost one-fifth is in the birds’ only state-designated winter concentration areas in Wyoming. During many winters 1,500 or more sage grouse gather there to forage on taller sagebrush stands above the snow, their only food source during Wyoming’s severe winters.

“Sage grouse and pronghorns just can’t catch a break,” said Kelly Fuller, energy and mining campaign director at Western Watersheds Project. “The 3,500 NPL gas wells will add to the damage already being done by widespread oil and gas development and out-of-control livestock grazing, not just in Wyoming but across public lands in the West.”

“These wildlife impacts are avoidable. That’s the greatest shame,” said Sarah Stellberg, an attorney for Advocates for the West. “BLM needlessly and unlawfully exempted Jonah Energy from restrictions designed to protect these species, at great cost to Wyoming’s Green River Basin.”

Conservation groups originally challenged the project in an April 2018 lawsuit filed in federal court in Idaho. In July some of the claims were transferred to U.S. District Court in Wyoming.

Today’s petition launches the case in the Wyoming court. In the petition, the Center for Biological Diversity, Upper Green River Alliance and Western Watersheds Project are represented by attorneys from the Center and Advocates for the West. 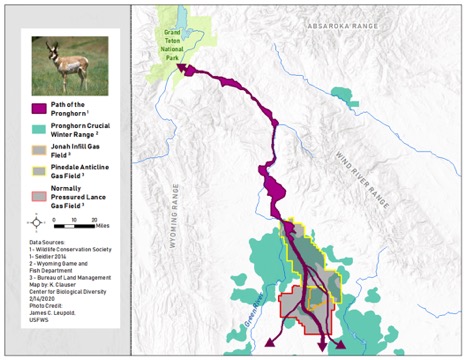 Western Watersheds Project is a nonprofit environmental conservation group working to protect and restore wildlife and watersheds throughout the American West.