Home » News » A Win for Free Speech in Idaho!

A Win for Free Speech in Idaho! 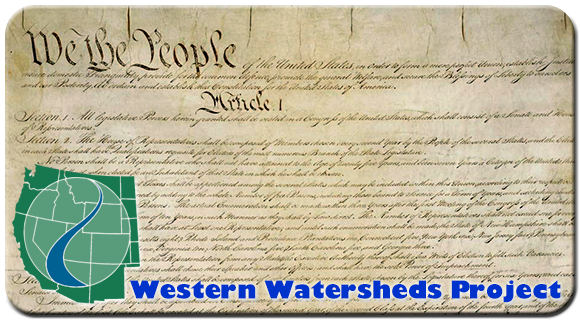 Earlier this month, the Ninth Circuit Court of Appeals struck down parts of Idaho’s Ag-Gag laws, laws that were designed specifically to stifle public interest watchdog groups like Western Watersheds Project from reporting on animal abuses in agricultural operations. Idaho already lost in District Court (read about that 2015 win here), so they took their case to the appellate court.

WWP was especially concerned about the state law’s ban on recordings at “agricultural production facilities,” which was so broadly defined as to include, “[A]ny structure or land, whether privately or publicly owned, leased or operated, that is being used for agricultural production.” We were very concerned that this would intersect with our work watchdogging grazing operations on national forests and BLM lands, and we’ve suspected all along that the language related to “public lands” in the law was aimed at us. We’re pleased with the outcome of the case.

The Appeals Court decision states that Idaho’s law is “staggeringly overbroad, and that the purpose of the statute [is], in large part, targeted at speech and investigative journalists.”  The court concluded that “Idaho is singling out for suppression one mode of speech—audio and video recordings of agricultural operations—to keep controversy and suspect practices out of the public eye.” It is clear that the law – drafted by the Idaho Dairyman’s Association – was designed to protect industry while ignoring animal welfare and civil liberties.

Score one for the good guys.

Many thanks to our attorneys and co-plaintiffs on the case!