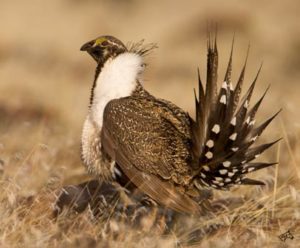 BOISE, Ida. – Today, in a sharply worded rebuke to the Bureau of Land Management (BLM), an administrative law judge granted Western Watersheds Project’s appeal of a 2013 grazing permit renewal decision that failed to protect sage-grouse on two public land allotments south of Ely, Nevada leased to the Southern Nevada Water Authority (SNWA). The Cottonwood and Scotty Meadows allotments both failed to meet rangeland health standards for wildlife habitat due to inadequate vegetation cover for nesting and brood-rearing for these ground-dwelling birds.

“The Southern Nevada Water Authority should be embarrassed by the poor condition of these allotments,” said Greta Anderson, Deputy Director of Western Watersheds Project. “Given that their ranches are just water-laundering operations, the least they could do is manage with wildlife in mind. BLM should be holding all of its grazing permittees to the highest standards and setting meaningful management that protects these public lands for everyone.”

Despite failing land-health standards for sage grouse, the proposed extension of the livestock grazing leases would not improve the damaged sage-grouse habitat, according to BLM’s own analysis.

During briefings, the BLM repeatedly denied any responsibility to adhere to the sage-grouse land use plan amendments, but even so, the administrative law judge admonished, “BLM’s selection of the proposed action and final grazing decision with no attempt to seriously consider and incorporate any terms and conditions that could benefit sage-grouse habitat was without a rational basis.”

“The BLM promised the U.S. Fish and Wildlife Service and the American public that sage-grouse would be protected by the 2015 Approved Resource Management Plan Amendments,” said Anderson. “Those promises are broken when the agency defends decisions that do nothing to foster the enhancement of restoration of healthy sage-grouse habitat, and we’re happy the judge called them out on these failures.”

The court order urges the agency to revisit grazing management while maintaining the slightly better standards of the overturned decision in the interim. When the BLM does reissue the grazing decision, it will have to conform to the amended sage-grouse resource management plan and adjust grazing accordingly.

A copy of today’s decision can be found here.